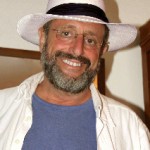 Hi Mira, Updating my CV, I tried on google to find your father’s email address to add to his contact information as one of my references, and to my shock and sadness, I see that he died in October 2009. Living in Israel, I am possibly the last person who was connected to him not to know of his passing.

I credit your father z”l as the single most significant Jewish influence in my life, which began in 1977 when he appointed me as the fine arts curator at the Magnes Museum.  I worked there for a year and then, infected with a love of Judaism and especially Jewish art, I made aliyah, and 32+ years later, I am still here — in Jerusalem — having taught at several universities, curated at several museums, was the art editor of The Jerusalem Report and the proud father of three grownup kids. That is an extremely shorthand version of my life, but it will help to put my feelings for him into some context.

Seymour was a very secretive man (the last time I saw your parents, maybe five years ago, I asked your mother how old he was, and she replied, “He’s doing alright”).  I did not know anything about him before he assumed the leadership of the Jewish Education Council, not where he was born, who his parents were — he said that his father “was a philanthropist, having given away a million dollars of good will” — where he went to college, or even that he had a daughter until I read his obit.

I always felt he was hiding a terrible tragedy in his life. Sometimes his face would reveal such sad eyes and long and deep creases, but then he would quickly recover. I never felt entirely at ease with him because I was afraid I would say something that would trigger the tearful look. Consequently, I always tried to keep the conversation lighthearted and bouncy because I knew he did not like to show that side of himself. And then when I looked at your photo in the SJSU website where one sees only your dark eyes and curly hair peering out from behind your daughter, I thought, “Hmm, the pomegranate does not fall far from the tree.”

I can still hear his voice in my head, and when I am baffled sometimes about how to act, your father comes to me and gives advice. Lately, I am working at a Tel Aviv art gallery/auction house where I help to set up exhibitions of young up-and-coming artists. I remember your father saying to me, “It doesn’t take a hacham to invite Marc Chagall or Saul Bellow to the museum. You’ve got to beat the bushes and make your own discoveries.”

I know I will miss him … a real tzaddik.

Give my best to your mom

And keep up the inimitable Fromer tradition

This site uses Akismet to reduce spam. Learn how your comment data is processed.